For years, Harald Neidhardt has dedicated his career to exploring the potential of exponential technologies, and the opportunities they can afford society, brands and entrepreneurs to reach more desirable futures.

Neidhardt is the CEO and curator of the Futur/io institute, a Hamburg based organization that has its sights set on pioneering culture and purpose driven missions.

With the 60th anniversary of JFK’s famous moonshot speech, in which he made clear his ambitions to put a man on the moon, fast approaching, Neidhardt has set his sights on applying this moonshot thinking to new, more pertinent challenges. Neidhardt recently sat down with Doreen Rietentiet on the Let’s Talk Change podcast to discuss his new mission – applying this moonshot thinking to tackling the ever-escalating climate crisis.

Doreen: Hi Harald, thanks for joining us on Let’s Talk Change, happy to have you. So you’re actually a futurist and have been dealing with a lot of innovation in your life. Today you’re here to talk about climate change and not just about climate change, but how we can tackle the problem with moonshot thinking. First of all, tell me a little bit about yourself, your company and what you do.

Harald: Yeah, a little bit about myself. I’m the CEO and curator of Futur/io – we call ourselves the European Institute of Exponential Technologies and Desirable Futures. That’s obviously a long name, but what it encompasses is that we have a European point of view. We’re starting to get a more global reach, but being European is close to my heart. It’s a fantastic, creative region. Over the last decades, I spent years in the U.S. and with Silicon Valley technologies, and I feel that, first of all, the longing for insights from America is no longer a top priority.

I think we have so much innovation and creative people in Europe that we have to bring closer together. And if we look at Europe, also at the technology part, we look at exponential technologies and we want people to make informed decisions. Take AI and robotics, you can make a decision to say, well, that might not be appropriate for me to invest in the next one or two years. Great. But please don’t say in two years, “Oh, nobody told me, I didn’t know”. So inherently, My personal vendetta was the term “digital transformation” because I’m in the digital space since, I don’t know, three decades probably now. We knew a lot of things and a lot of innovations were on the horizon, a lot of people use it already. But if people still talk about digital transformation now, I think it’s the clocked-up investment, which they didn’t take action on five years ago or maybe even ten years ago.

That leads me to this decade of action we are all in, but also our term Desirable Futures. So the idea is that we have to not only think that the future will happen because somebody is in charge, whether it’s politicians or in some sense, Bill Gates. No, it’s all of us. So it’s not like this one big power who makes all the frameworks or who is inspiring and inventive. It is individuals. It starts with a young person who was in South Africa and now is in Silicon Valley, Elon Musk. But there’s a thousand people who are just as creative. You know, I think a very beautiful example for this is Biontech and the founding pair. But this is a long intro, I’ll just stop, and we can go with the flow. But I do want to go back to this as an example, because it’s about also understanding story and a narrative that we need in these times.

Doreen: You chose a particular day to launch this campaign, the Moonshoot day – that is part of the trigger that initiated this kind of ambitious activity. What does your initiative have to do with the moon and in particular the moon landing?

Harald: I’m fascinated with space and the technology around it, but I also felt that when the moon landing happened, it was actually my mom’s birthday in 1969, I saw it on TV, I was pretty small but still, you felt something was happening.

In a way I think I carry this kind of optimism, because you can achieve this – going to the moon – and setting goals to do the hard things. And that’s why the JFK moonshot speech, which we celebrate on the 25th of May, is something where 60 years ago a politician basically set a goal and he said, “let’s go to the moon before the decade is out”. And he did not really say how exactly. It was more or less asking Congress for money so that NASA can figure it out. And at that time, Teflon, Velcro all of these tools you need, were not yet invented. Furthermore, it was also a time of crisis. And so, in 1961, he inspired the nation to basically say, ok, let’s build an industry, let’s tackle this challenge and actually achieve it before the decade is out.

I feel that this kind of moonshot thinking has been our mantra for the last three years since we started Futur/io, saying we need to think bigger. This is a futuristic point of view, but also optimistic, and if most people think about the future, they might think about the next 18 months, like, oh, the lease of the car is up and hopefully we’ll go on this vacation next year. But after that, it’s like, oh, suddenly I’m old and I’m in retirement. But the part in between and the feeling for time, whether it’s everything between 18 years or the next decade, it’s so uncertain that people don’t really grasp it. But here we have an example that if you think big, try to set up something which might be happening in the next eight or nine years, but then also use this kind of focus to bring other people together as a platform, as multiple industries and cross pollinate, learn from other people.

For some people it’s frightening, because you have no certainty – that’s exactly where innovative and creative people are coming in. And over the last three years at Future/io we have established corporate events, executive programs where we worked with chief digital officer’s, chief innovation officer’s and so on. And those were sort of very close invite only happenings, including meeting in Davos. But now we’re opening this up as a platform and using the date in this anniversary to say, “I think right now we need a thousand Kennedys”. So that is what’s inspiring me. It starts with a person, it can start with 10 people, the Misfits, Steve Jobs, put them out there.

But if we have a thousand Kennedys who support what Greta and Luisa and the young people are doing on the streets, but bring them into the corporate environment, that’s the lens we’re using. To say, OK, this thing is so big, the challenge is big, the timing is somehow hard to grasp for people. But if we bring it a little bit closer to the environment and your workday, I think we can try to achieve something.

Tune in to the full episode to learn more about Neidhardt’s new mission – and sign up for the kickoff event to be a part of this ambitious initiative yourself. 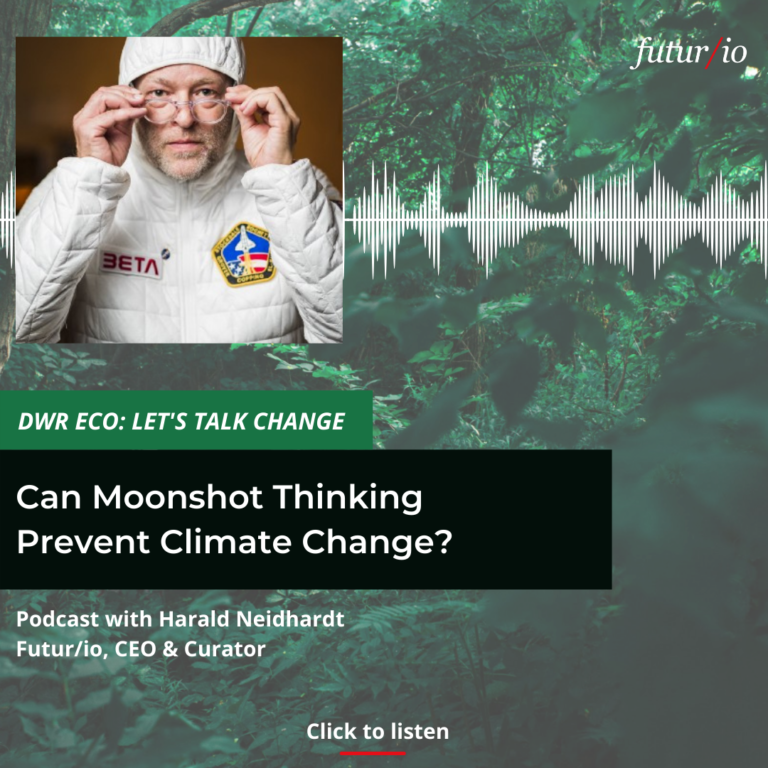 All rights reserved ©2022, Futur/io Institute – Futur/io®  is a registered trademark

You have already reported this
Clear Clear All